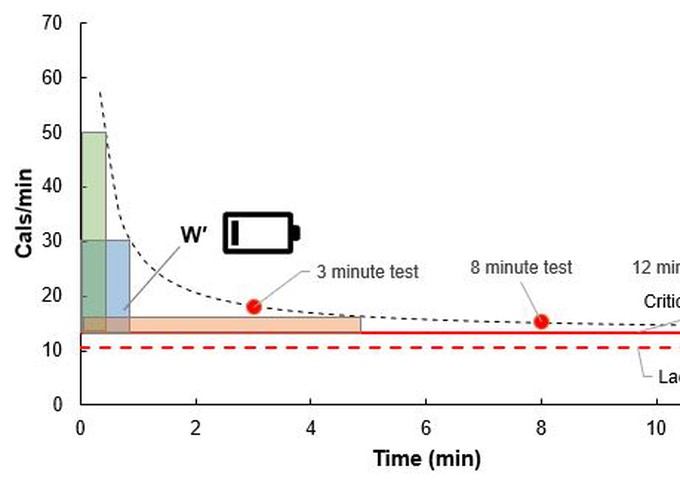 Download the spreadsheet to find out your figures here.

What is Critical Power?

Critical power is a concept that all athletes will be intuitively familiar with. Your ‘critical power’ is the highest pace that you can sustain when exercising, where if you go just a little bit harder things start to get hard really quickly. Imagine you were asked to do three maximum effort tests on an Assault Bike. The aim in all three trials is to complete as many calories as possible within the time period – one is 3 minutes long, one is 8 minutes long, and the third is 12 minutes long. The testers are kind enough to give you enough time to fully recover between each one. Let’s say you complete 54 calories in 3 minutes, 123 calories in the 8 minute trial, and 174 calories in the 12 minute trial. The results will have the following pattern:

On the y-axis we have a measure of ‘power’, in this case the number of Calories burned each minute. On the x-axis we have time. As you might expect, you can produce a far higher ‘average power’ over the 3 minute duration compared to the 12 minute test. But, eventually that line starts to level out, and the point at which it becomes flat is called the “critical power” threshold. It’s a threshold that separates ‘steady state’ and ‘non-steady state’ work. That is, you can exercise below the critical power threshold for a relatively long period of time (20 mins plus) in a sustainable manner (e.g., without lactate levels building up to intolerable levels), but as soon as you go above that line, you’re on borrowed time - - you’re eating into your ‘anaerobic battery’, which has a finite size and once it’s been used up, it takes a long time to recover. This is known as W′ (pronounced “W Prime”). Now, you can either tap that battery out very quickly by going well above your ‘critical power’ threshold (e.g., the green box in the figure above; this athlete could only sustain working at a rate 50 cals/min for ~30 seconds), or you could use that battery up much more slowly by working just above your critical power threshold (e.g., the orange box; this athlete could work at a rate of 17 cals/min for about 5 minutes). Either way, once that battery has been used up, the only way to recover is to bring you power output back down below the critical power threshold. Having a higher critical power threshold is clearly beneficial for functional fitness racing – it means you can work at a sustainable pace for longer, and recover more quickly between bouts. Functional fitness racing is an intermittent, high-intensity sport, and so knowing your critical power numbers can be extremely useful. Here’s how:

Predict your performance over any time/distance

Track changes in fitness over time

How to measure your critical power and W′

You can calculate your critical power/speed and W′ values from a minimum of just two tests, although 3 is preferable. You want the shortest test to last at least 3 minutes, alongside a longer one lasting ~12 mins. If you’re doing a third, it should ideally last ~8 mins. The tests can either be ‘for time’ (e.g., a 1 km and 4 km row time-trial), or for distance/cals (e.g., maximum distance/cals in 3 minutes and 12 minutes). For accurate data, the tests need to be maximum efforts. You might already have recent ‘PB’ attempts over suitable times/distances, and so can plug those numbers in straight away. The two tests can be completed on the same day, so long as you leave enough time for full recovery (at least 30 mins). You can carry out these tests for any ‘cardio’ modalities (e.g., running, rowing, ski, bike), although it’s probably best to focus on improving one piece at a time. If you haven’t completed a test over those sorts of time-frames before, there’s likely to be a learning effect, and so it would be a good idea to perform at least one familiarisation test before doing this for real. Here’s an example of a single-day testing protocol:

That’s it – now you simply plug those numbers into this spreadsheet to find out your critical power and ‘battery’ size. Note, time is entered in seconds here.

Download the spreadsheet to find out your figures here. 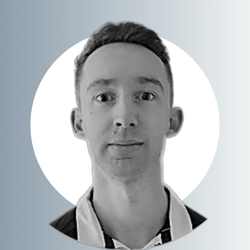